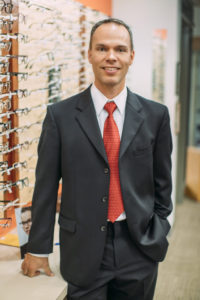 After medical school, Dr. Edwards returned to the Northwest to complete an internship at Deaconess Medical Center in Spokane, Washington, before completing his ophthalmology residency training at Texas Tech University. While he was in residency at Texas Tech, he attended the Bay Area Ophthalmology Course at Stanford University and did an ocular pathology rotation at the University of Wisconsin in Madison. He also served as chief resident and was in the top 10% nationwide in resident surgical volume, including the top 5% for cataract surgeries. Dr. Edwards was the first surgeon to perform cataract surgery with toric intraocular lens implantation to correct astigmatism here in the Walla Walla Valley. He is board certified through the American Board of Ophthalmology, and scored in the top 2% of the nation on his written board examination, as well as performing above average in every single category on his oral board exam — which is the highest score achievable!

Dr. Edwards is a member of the American Academy of Ophthalmology, and his professional interests include small incision cataract surgery (including astigmatism correcting surgery and implants), management of macular degeneration (including doing thousands of injections for wet macular degeneration), medical and laser management of glaucoma, basic eyelid surgeries, and medical and laser management of diabetic eye disease, among many other things. He has served for years on the board for the Walla Walla Valley Medical Society, including as president for 2015.

Dr. Edwards is very excited to be living in the Pacific Northwest again after his training took him elsewhere, and he enjoys activities such as traveling, running, camping, backpacking, hiking, golfing, basketball, and reading. He has enjoyed such adventures as hiking across the Grand Canyon, living in Europe for a year, hiking the Kalalau Trail in Kauai, completing a trail ultramarathon in the North Cascades (twice), hiking the Wonderland Trail around Mount Rainier in its entirety, hiking the rugged West Coast Trail on Vancouver Island, and trekking up Half Dome.